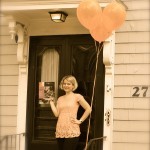 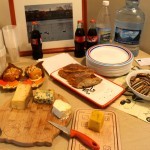 It’s been two weeks since I opened my studio aka living room to the public, and it is time to look back and draw a conclusion.

The weekend of May 11 & 12 has been a blast! It’s been a lot of fun, it exceeded all my expectations, I met so many great people and I’m incredibly sad that it is over and that Cambridge Open Studios only take place once a year.

Despite the rather unpleasant weather conditions on Saturday we had a steady crowd of people coming in, taking a look at my artwork and asking questions. I really enjoyed talking to everyone who wanted to know about my ideas and inspiration, my best practice for preparing resin or the locations of my photography. Of course people also appreciated the wine and cheese bar in the hallway, there were several visitors from France who praised our French bread and the selection of tasty dairy products 😉

Since Sunday also was Mother’s Day I had been afraid that there would be less traffic, even more so because the majority of friends and acquaintances had stopped by on Saturday already. Far from it! Most of the time the stairs that led to the living room creaked and announced new visitors and promised interesting conversations, enthusiastic comments and simply fun. Thanks to my husband we had live guitar music from time to time and eventually the sun came out to turn Saturday’s rain into multiple rainbows and blue skies. The last visitors left around 6 pm and that was the time I could finally take a deep breath in and reflect on the past two days.

I have to thank everyone who contributed to that weekend’s success, either as a visitor, a promoter or supporter in general. Thanks to all the friends and my family who endured weeks and months of monotonous talking about the preparations for Cambridge Open Studios and who still managed to inspire me with ideas and helpful thoughts. I also want to thank everyone who announced Cambridge Open Studios via word-of-mouth advertising to family, friends and colleagues! And talking of colleagues, special thanks to Milo Martinez of Black & Tan Company for providing the beautiful table as part of our collaboration 😉 Not to forget the staff of the Cambridge Arts Council who once again did a great job preparing and organizing this huge event!

All of you made these two days of Open Studios a huge success!