This is the first pair of baby slippers that I was actually able to finish. There are numerous adorablepatterns out there, and I’ve tried a few, but always ended up in a situation where the stitches wouldn’t add up any longer and I decided to unravel the whole thing (also because there weren’t any upcoming baby showers that would have justified further devotion to this). This time it was different. Good friends of ours just became parents, and I happen to know that one of their favorite colors is green. It was just one more lucky coincidence that I came across a baby slipper pattern that suggests using green yarn (not that you couldn’t choose any other color…;-)), so I decided to give it a try. There were some difficult situations with the star stitch that was being used, but I was able to figure it out and the stitches just kept adding up according to the pattern, what a miracle! Then there was the problem with the straps and it took a couple of attempts until I finally got it right. The joy and pride that come with finishing a project like this are unbeatable, especially if the result looks just like the picture in the book 😉 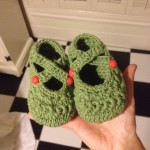